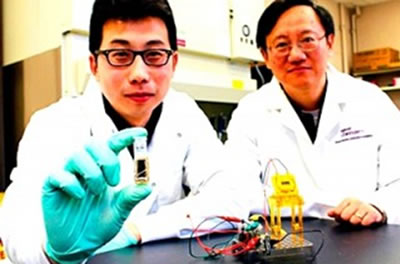 Recent decades have brought to mankind particularly swift changes: automation in industries and agriculture is in a full growth, buildings and houses equipped with smart conveniences, services and utilities and etc … All this almost zeroed people’s "energy waists". Although high-calorie foods and in particular, sugar and sweets, are more and more criticized, still, just as half a century ago, people’s life is not conceivable without sugar.

Traditionally sugar is produced from beet or cane. Their processing supplies sucrose, which consists of glucose and fructose. Glucose is a main energetic for the brain diet, an important source of energy for working muscles. Due to the metabolism of 100 grams of sugar an organism receives 374 kilocalories. Under the influence of consumed sugar humanity might have got an idea of sugar energy sharing to make operate gadgets that facilitate his life.

«Sony» experts were first to demonstrate in 2007 a battery made of sugar. Few years after, in the laboratory of the Virginia Polytechnic University was developed a battery on the basis of sugar. According to professor Percival Zhang, author of the project, they created a battery, which energy is a much denser in energy accumulating than traditional lithium-ion batteries. "Sucrose is an excellent source of energy of the Nature itself - said Zhang. - Therefore, we found it logical to make use of this source and to create an ecologically friendly battery". In contrast to other fuel cell, a sugar cell is safe - easily biodegradable, it does not contain flammable and explosive substances.

Sugar energy once consumed, it is easy to recharge the battery - just add to it a new batch of dry bulk product," - said Zhang. In a year or two, going to moonlighting at the computer, we'll think about both: how much sugar to put in the coffee, yet also how much of it your favorite gadget asks.

* Photo from http://www.cnews.ru
** The results were published in the journal Nature Communications.