The older you get, the less you want to be involved in cheap intrigue, caused scenes and tantrums ... One longs just for a cozy house, a delicious dinner, and for a person who feels certain about that much sugar in your coffee. .
(Unknown author) 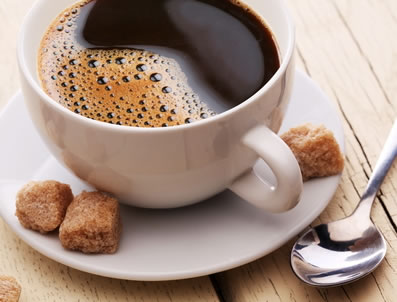 For more than a century, the coffee is enjoyed all over the world. Coffee is not just fit for consumption, it is much more - it's a part of the culture. Actually coffee world annual consumption amounts to more than 134 million bags, making coffee the second best-selling product after oil.

Brought to Europe by Venetian merchants in 1615, the coffee along with cocoa and tea is one of the three great drinks of "sobriety".

The history of coffee has retained several names. Here you are with one of them - Nathaniel Konopios, Cypriot who studied at Oxford. Historian E. Wood and philosopher J. Evelin described a "magic" effect of coffee prepared by Nathaniel: in May 1637 the first coffee houses were opened in Oxford. This event influenced enormously the student life — just there, might first controversy had arisen "With or without sugar ?!"

So, you have already prepared a Turkish coffee brewing pot, and have coffee beans grinded...
Now put a top-full teaspoon of coffee in the pot and put it on a low fire to boil.

The flame shall be small enough to reach the right temperature: in 5-7 min. you see small bubbles at one wall of coffee brewing pot. When it bubbles all around and coffee is about to spring out, the peak is reached. Stir the contents with a teaspoon; try not to pour the thick out into a final cup.
And another tiny trick: add two drops of cold water into your drink - to make its taste softer and more pleasant. Now you may fill cups with coffee, adding (or not?!) sugar, better some Demerara cane sugar ... and do enjoy your drink.