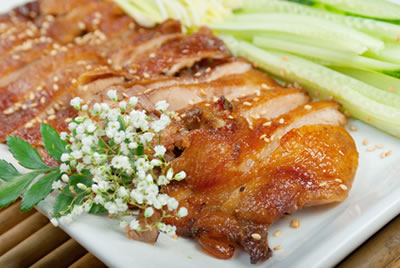 In many cuisines of the world duck dish is a traditional one but Beijing Duck is the most famous specialty of Chinese culinary art. Named after China’s capital, this dish and its history started in Nanjing - ancient capital of China. There, according to the legend, behind the Temple of Heavens a jade colored stream run down the hills, falling in ponds, where white ducks lived. The ducks breed won fame to be an almost best meat and were successfully reared in Europe, where they had been imported in 1873 under the familiar nickname of "Beijing Duck".

Anything coming from China passes all understanding for European mind and imagination. And that is the reason why an authentic Beijing Duck could be tasted only in her homeland (or in a good restaurant, where a first-class Chinese cook works). Nevertheless, you might take the risk to produce yourself this culinary miracle.
Beijing Duck is mostly alluring by its crisp, unforgettably crunchy and sweetish – carrying a high skilled cook mark. Not one and everyone would succeed in making the dish crispy, but we will let you in this secret ..

At the last stage of cooking you should smear a duck with a mixture of 1 tbsp of honey and 1 tsp of fructose with 1 tbsp of soy sauce. Honey consists of 60% fructose, and thanks to it you'll get a thin crisp. Put the dish on a rack in the lower part of an oven at the "grill"-mode for 5-10 minutes, and roast until golden-brown color.

After duck out of the oven cooled, slice carefully the meat away, so that each sliced piece had a marvelous crisp on. Generally, it is believed that there must be right 108 sliced pieces - numbered by Buddha incarnations. Take a thin unleavened pancake; apply some Hoisin sauce, put atop onions, cucumber and duck ... and soon now your friends will beg you to open a Chinese restaurant of your own.