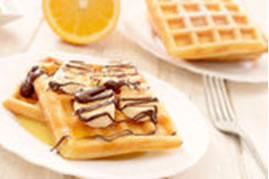 If you ever had a chance to try Belgian waffles, a taste beyond compare will lure you again and again.

It‘s only in 1958, when Brussels hosted the first post-war World Exhibition, Belgian waffles gained a world-wide fame. Just after they’ve got many fans wherever and numerous options for cooking. Here we’d like to make you familiar with two kinds of Belgian waffles: those of Liege and those of Brussels.

«Gaufres de Liège» were invented at the court of the Prince of Liege in the 18th century: a royal chef had added sugar cubes straight into the dough. Due to it waffles had got a unique taste and aroma. Pearl sugar is absolutely needed for Liege waffles. Surely, it might be replaced, but, alas, waffles won’t be the same. Pearl white sugar looks like lilly-white crushed lumps, very solid and shaped like pearls. It is used for cooking, decorating confectionery and bakery, it doesn’t melt, nor caramelized. At high temperatures it doesn’t turn yellowish. When more sugar added, the dough pastry gets pleasantly crispy. As a rule, Liege waffles are hard, round or oval by form. They are served either cold or hot.

Brussels waffles are shaped rectangular and more soufflé and soft. They are served warm, sprinkled with powdered sugar, whipped cream, chocolate or fruit (often with strawberries or bananas).

One even doesn’t dare call this waffles, it is a genuine pleasure to taste them ... So delicious, tender, and soft, with a pleasant crispy taste. A bliss of the moment!