in Latin America, where from it first came to Europe. Currently, island of Mauritius is a major producer of Demerara sugar. Its sellers claim that Mauritius Demerara has the best flavor and aroma, and that it keeps better than any other up to the quality of sugarcane grown on the soil rich in volcanic ash. It might be just a good advertising tool.

Many experts assert that Demerara has the superior quality due to it hand- made production  method in small artisanal enterprises following  ancient traditions. This is true when it comes to the Demerara sugars coming from Latin America, Africa, Mauritius or the Caribbean islands. But we cannot ignore the fact that nowadays the UK and Canada refineries bring to its local markets brown sugar Demerara. Could it taste as good, as the Mauritian or Colombian Demerara, we have not yet had a chance to try it.


One way or another, Demerara stands out among those goods which are united by a general concept of "brown cane sugar." It is  evidenced by such  codes as UC CFR (The Code of Federal Regulations US) and EuroCode 2 Coding System (The Codification System of food EU), where Demerara is put in under its trade name, unlike most sugar varieties, which fell into the category "all and sundry".


Old dictionaries and encyclopedias, describing Demerara, stress large size of its crystals, bright yellow color and the fact that it was obtained, unlike refined sugar, without processing by sulphurous acid ( or without being sulphuretted).


Due to its properties, Demerara is placed right between Turbinado and Muskovado (or Barbados sugar) amidst brown sugars line. Having more rich amber color than the Turbinado, Demerara has still not so dull dark brown color, as Muskovado. Recommended for tea and coffee or as an ingredient for some culinary dishes, Demerara, by all experts notes, has fine delicate flavor and light tender aroma, reminiscent of tropical flowers. This very sort of sugar is true golden mean in a brown cane sugar line.


Numerous are recipes that make use of  Demerara as an essential component, these  might count thousands. Naturally, it's quite a variety of sweets, pastry, drinks, including alcoholic cocktails. Also Demerara is largely used in meat dishes and canned products.


As refined sugar, Demerara can be stored for a long time. However, in order to keep afresh this delicacy and its specific aroma and flavor, Demerara shell be stored in tightly covered containers at a room temperature. 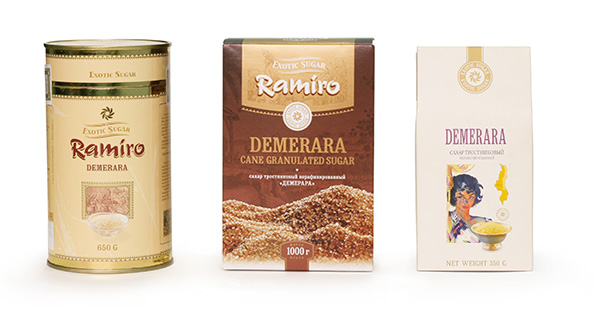