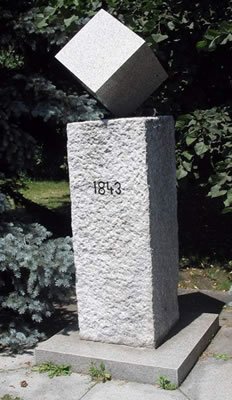 In 2013, the Czech Republic celebrated a memorable date - 170-th anniversary of the first sugar cube produced by Czech scientist and entrepreneur Jacob Christoph Rad. Living in Daĉice, he ran the brothers Graebner first refinery in the Habsburg Empire.

If not for love, it is possible that mankind became acquainted with this kind of refined sugar much later, but ... while splitting loaves of sugar (the sugar was called at the time), Juliana, Rad's wife, hurt her arm. The scientist was very upset. In order to avoid exposing his wife to such harm any longer, in a couple of months he offered her a gift in the form of 350 evenly stacked pink cubes. So, in 1841 the first sugar cube press machine appeared. Next year J. Rad had managed to run a full sugar cube production cycle. And in the autumn of 1843 refined sugar pieces went for sale. For some reasons, the production of such sugar occurred unprofitable, and as in 1852 the factory was closed, J. Rad with his family moved to Vienna.

The sugar cube technology had been forgotten for many years. Still the twentieth century saw glorious come-back of Czech invention and the technology revived. In September 2008, the Czech Republic led an information campaign, where “refined sugar of Daĉice” was used as a symbol, or rather, a monument to sugar cube with a short date notice "1843". Actually, museum of the city that gave birth to the idea of "handy" delicacy, presents an entire exhibition of sugar cube history.